Oceans cover more than 71% percent of our planet – and those oceans contain 97% of all the water on Earth. More than half of that water is deeper than 1 km (that’s only about ½ mile down.) Scuba divers and explorers have never explored most of the water this deep because it would kill them. There are several reasons why deep water is so dangerous for humans: 1) It’s cold – really cold, 2) There’s no air – without air, you’d pass out in about 5 minutes; 3) The water pressure gets stronger the deeper you go – the water pressure would squish you and collapse your lungs; and 4) This one is a little more confusing, but basically all the pressure on the body causes something called “nitrogen narcosis” and it would cause you to suffocate. For all those reasons, we don’t really know much about the fish and other creatures that live in our deep oceans. We know that they don’t get much light from the sun, that they can handle lots of pressure, and that they can survive in very cold temperatures. Most of these fish also don’t have skeletons, their skin is jelly-like, they grow very slowly and live longer, they don’t reproduce as quickly as fish closer to the surface, and there are not as many of them. All these things make them very different from the fish we normally see and find in seafood restaurants.

So, why does this matter? It matters because the Earth’s population is growing every day and today more than 1 billion people depend on fish as their main source of protein. With so many people eating fish, fishermen began running out of fish that that they could catch close to land and near the surface. Naturally, they moved further out to sea, but those fish populations started to get low too. Eventually the fishermen had to try new ideas and began fishing in deeper waters. Fish like mackerel, which live close to the surface can reproduce 50% of their population in a year, but these deep see fish can only reproduce 6% of their population in that same time. Through research, we can learn more about these fish and how to fish them at a rate that keeps them from being overfished and disappearing. Have you ever heard of aquaculture? It is the farming of fish and other underwater plants and animals. It’s a lot like agriculture, which is the farming of plants and animals for food and other products on land. Aquaculture is one important way in which we can make sure that there are enough fish for people to eat and that the fish in our oceans aren’t overfished and have time to reproduce. In the last couple of years, aquaculture has become a big business. In fact, 50% of the world’s supply of seafood today already comes from fish farms across the planet. Aquaculture is one way in which scientists and fishermen are working together to figure out how to keep our oceans healthy and our population fed.

Watch MinuteEarth’s wonderful video on this 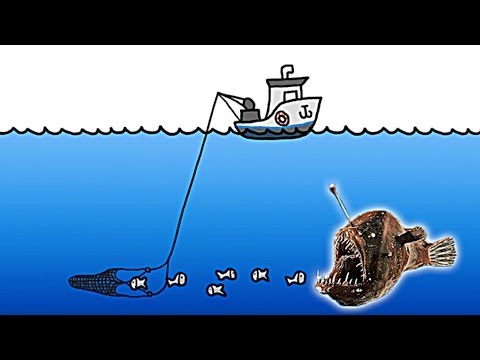